As before, we will be looking for you to join in various roles: we'd love to see you become a participant and create the wonderful atmosphere we could enjoy in 2016. We welcome you as an organizer joining our ranks and taking the conference to new heights. If organizing is a little too much, become an advisor and have discussions with us on what the content should be and how we should approach the conference in general. And we're right about now starting the search for speakers. There will be a call for co-creation to ask for you to get in touch, but co-creation is really an ongoing process. Get in touch so that we know of you.

There was a great blog post in synch with this conferences values  today. We picked up a few ideas from it:


We also know better than before how we'd describe what we seek in sessions:
There was one particular discussion I had with many of our 2016 speakers on the conference working towards not paying to speak. When I shared the news that we will be paying honorariums already this year, every speaker said they don't do this for money. They are happy with the expenses covered. Sometimes they even feel they would pay to meet the other speakers and get in the in-circle, and to get the stage to meet all the wonderful participants. My point is only: this is work, even if it is fun work. Opportunity cost matters: with all time you could be doing something else. If you can be paid, wouldn't that be great even if not a must-have? If you would choose over two otherwise similar audiences but one pays and the other doesn't, wouldn't that matter to you in your selection?

There's probably very few topics while organizing this conference we've had as much discussion and wonder as on a seemingly simple task of t-shirts. Since we use this blog to share stuff conference organizing around European Testing Conference teaches us, this a must share lesson.

Have you even been to a conference that hands out shirts, where all the shirts are same model but just different sizes? There's a concept of "unisex" shirt, which basically means that everyone gets to wear a t-shirt designed for men.

I've received during my career probably about 100 conference / event shirts, and very few of them stick. The fact that they are men's shirts has always meant that I pick up one, and give it as a souvenir to one of my relatives, or enjoy the cleaning opportunities with a new rag. Out of these shirts, there's two I have used at or after the conference: the TestBash t-shirt (fitted for women!) and the fitted long-sleeved shirt one of my employers got me that was my absolute favorite for a long time.

Think of it this way. If you are a man and arrive at European Testing Conference next week, how happy you'd be when we hand you a women's fitted model? We thought you wouldn't be, so we've been using a lot of time on back and forth on trying to think what we'd like to give as choice for people.

Last year at Agile 2016, this whole issue of t-shirts became very clear to me. I was given a "women's shirt", that was that only by a name. The poor conference organizers were puzzled on the discussion, after all their t-shirt vendor had told them the model they had was women's. It was only smaller in sizing, not fitted as a women's shirt would be. With European Testing Conference, we heard exactly the same with t-shirt vendors, and going around to find just the right model is actually a lot of work.  It's so easy to get the wrong one even if you tried.

Not everyone, regardless of gender will ever care about the t-shirt. We ended up with different image designs for the men's and women's, and some feel strongly that wouldn't be right either. But let's say it this way: I'd rather not have a graphic element on both sides of my chest, that works in men's but not so much on women's version.

Conference t-shirt is a successful investment if people wear it after the conference, and it starts good discussions that perhaps lead to people discovering the conference. We'll see how this works out, but it surely is an experiment that takes a bit of effort where everyone is an expert on people they've been in touch with. Now, fingers crossed our shirts arrive in time, and we don't have to ship them around after the conference.
By Maaret Pyhäjärvi at February 05, 2016 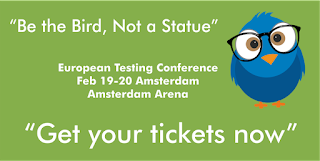 Get your ticket today!